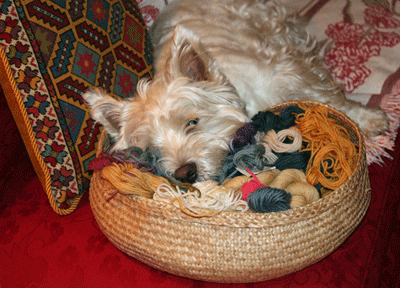 I got the idea for this little purse from a robe owned by Sultan Suleyman the Magnificent. The garment is described as a ceremonial kaftan"with ogival pattern" and dates from the mid sixteenth century. It is on display in the Topkapi Museum in Istanbul: I have promised myself I will get there one day.

I have found many artifacts from the Ottoman Empire to be inspirational so this isn't the only design that you will see on this blog with an Islamic influence. 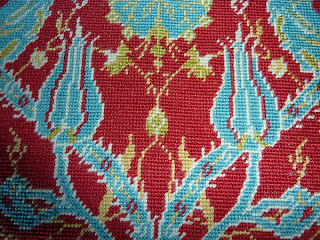 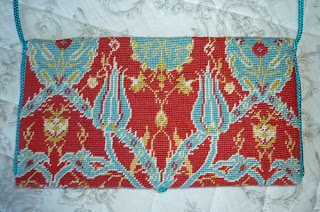 I sewed the purse in half-cross stitch on 18-count canvas using DMC pearlised cottons for their rich, saturated colour and the lovely silky sheen. When it was finished I lined it with a turquoise silk and hand stitched it together. My sewing machine wouldn't pierce through the canvas and the fabric stiffener that I had ironed on, even with a heavy duty denim needle! It is fastened with a tiny wee button I found in my button jar.

I like to wear it cross-wise when I am going out in the evening dressed all in black. It is quite a talking point.
Posted by Susan at 4:58 PM 1 comment:

These two cushions are very loosely based on a little handbag which I purchased at a small shopping centre in . The shop sold lots of painted handbags, belts and other leatherwork. Some of the designs were just glorious. 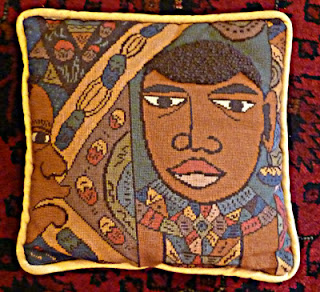 When I was studying multimedia, quite a few years ago now, I used these two tapestry cushions as inspiration for an animation in which I brought the characters (the angry man and his wife) to life. I remember I had great fun doing it. At the end of the animation it panned back to the cushions and the characters had both gone leaving an empty space. 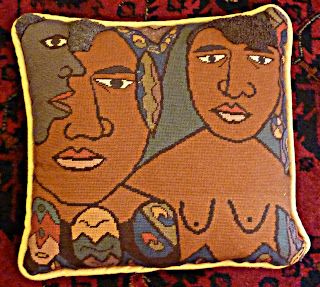 I used a stitch called velvet stitch to create a curly pile for the hair, but I didn’t trim it, instead keeping it loopy.
And as is my usual habit, I used ’s tapestry yarn.
Below is a collection of some more of my work. 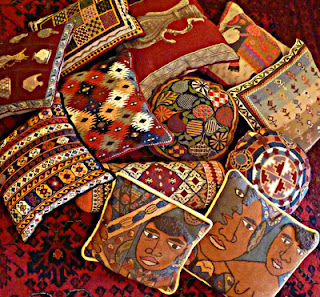 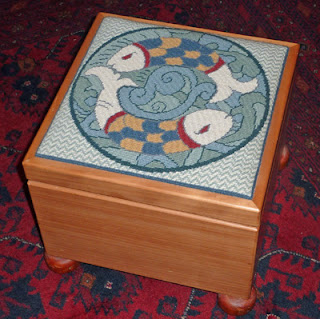 The two designs here are both fairly early ones of mine. I did them both as tops to go on small boxes to keep “stuff” in: one for each daughter. You can see a complete box above. I had these made specially when I lived on Norfolk Island from the local Norfolk Pine there.
Both needlepoints are based on Persian designs. The one I called Pisces (see below) is based on the detail from a bronze bowl engraved with a central roundel approximately 2cm in size. Of course my version is much bigger. The bowl comes from Khurasan in and dates from the early 13th century. The outer border of the same bowl is the basis for a lampshade design. I haven’t sewn this one up yet but the design is shown, also below, although the colours look very odd having been translated from a software program for doing tapestry designs, through Photoshop to turn it into a jpg file, but you can get the idea.. 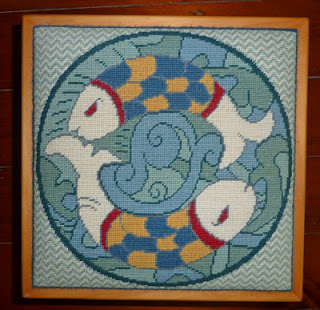 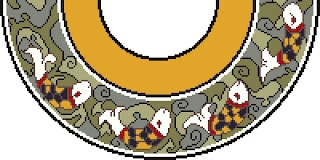 The width of the border on the bowl is approximately 1.5 cm. It is presently in the and , .
The second design, known simply as Islamic Fish was originally painted on a fritware bowl in black slip under a turquoise clear glaze. The diameter of the original bowl was 14.5cm and it comes from at about the 12th century. It is now also in the and , . Shoals of fish were very popular and decorated many bowls and plates. 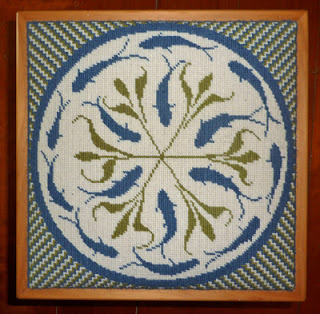 My mother has been fantastic over the years helping me sew up some of my designs. I could always think of new ones creating a back log of ones I wanted to get sewn up. And as anyone who has ever done this kind of work will tell you, it can be a very time consuming exercise. She has always been there encouraging me and offering her advice and support. My mum is definitely one of a kind and I love her to bits for it!
Posted by Susan at 3:11 PM No comments:

Craft goes through fashions like anything and at the moment tapestry, or needlepoint as it is more properly known, is not the craft du jour. I think knitting would probably take that crown at the moment (something I also love to do). However, I find pulling a thread smoothly through canvas and counting stitches (I prefer to use graphs) can be a most therapeutic and mesmerising pastime, particularly if you can set yourself up in good light while watching TV in the evening. I am afraid I am one of those people who can’t just sit and watch the television: I have to be doing something else as well. Needlepoint fits the bill perfectly as it isn’t too complex. 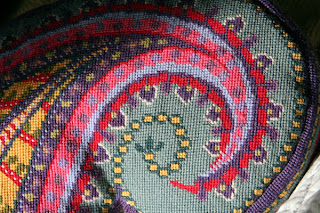 When I started doing my own designs I worked on the principle that many people would be like me: come home from a long day in the office, maybe staring at a computer screen, and would want to do some craft that was relatively simple. Consequently I chose simple repeating patterns and limited colour palettes that could easily be seen in artificial light. It was also less wasteful with yarns. 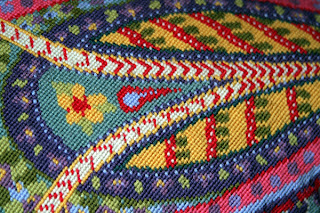 Many of my designs are drawn from tribal and folk sources and this one is no exception. It is based on an Indian folk design (although apparently this design was also seen in Celtic art two millennia ago) that was later commandeered by the British and called paisley after the town in .
The boteh or teardrop design is synonymous with paisley patterns and was particular popular in for shawls from that region. The pattern travelled back to via the East India Trading Company where it was adapted to suit European tastes, and quickly became very popular for textiles there.
I have chosen a palette of just 12 vibrant colours in Appletons Tapestry Wool to reflect the Indian heritage of the pattern. There is also a band of stitching that forms the wall of the cushion - which actually took longer to do than the front because of its long length!
As a rule I tend to use because of the slightly aged effect you get. I find DMC and other brands are great when you want cleaner, clearer colours, or “lolly” colours. My local stockists for in is Threads and More. 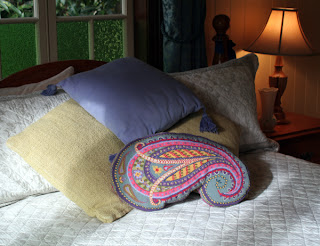 I made the cushion in the shape of a boteh just for a bit of fun.
Posted by Susan at 3:30 PM No comments:

﻿I started out doing cross stitch when I was just 11-years-old, inspired by my parents. At the time we were living in and my father had to work quite a few night shifts. He had a tiny little 3” picture of a design that he decided to do in cross stitch. I watched as he, in minute detail, coloured in tiny square after tiny square on graph paper to make his design.﻿﻿﻿﻿﻿﻿﻿﻿﻿﻿﻿﻿﻿﻿﻿﻿﻿﻿﻿﻿﻿﻿﻿﻿﻿﻿﻿ ﻿
﻿This was back in the 70s, a long time before computers were in general use. The result is shown above, not very well photographed I am afraid, but you can get the idea. He even placed his moniker in the top right-hand corner as you can see (below).﻿﻿﻿﻿﻿﻿﻿﻿﻿﻿

﻿I recently wrested the work off my parents to hang in my stairwell. I just love its simplicity and clean lines. He assures me that every cross stitch is meticulously worked the same way: I haven’t checked, but knowing my father I believe him! It is a real family treasure.﻿﻿
﻿﻿ ﻿
﻿﻿While he was stitching his piece I started work on mine (see below, bottom). It was originally used as a lampshade but it started getting a bit frayed so I ended up having it framed. At the same time my mother, and even my brother (although he may not admit it now), were all working on something.

On that point about the men in my family all doing some stitching: my father was ex-navy and he tells me that many men would do their own sewing. Often they were doing long shifts where nothing much happened, which could give way to ten minutes of frenetic activity before lapsing into quietude again. Embroidery or knitting helped while away the long hours. And of course men are often tailors and upholsterers, so I wonder why it has become unfashionable for men to pick up their needles. Maybe they could learn a thing or two about the peaceful contemplation and sense of achievement that many women get from creating their own pieces.

I created the other cross stitch (below) from the left over yarn and fabric when I was about 14.

I started my first needlepoint back in 1986 designing it on graph paper: it was about 22 cm by 35cm and was based on an oriental rug design. It is framed and on the wall in my spare room, but unfortunately the moths have claimed it as their own and parts of it are beyond repair. I look at it now and really don't like it that much. The colours are all wrong, the design is lacking. But what this piece did achieve was to encourage me to have a go at creating my own designs. The cheesy offerings of Constable paintings converted to needlepoint and printed badly on canvas didn’t excite me, nor did the abundance of overblown cabbage roses.

Kaffe Fassett was just getting going and he and Candace Bahouth were an inspiration. I don’t pretend to be in their league by any stretch of the imagination. I just get a kick out of doing my own designs for me.
The experience of doing a design on graph paper convinced me that there had to be an easier and better way. I bought one of the first Apple Powerbooks in the early 90s: it was colour and at the time, together with the printer, set me back about $9000!
Now I needed some software. I had to wait a couple more years before I found what I wanted, and from there I was off and running, producing my own designs and then sewing them up.
I will use this page to show case some of my designs.
Posted by Susan at 3:49 PM No comments: